When people think of fangirls, they typically think of girls crying hysterically at some super-hot celebrity who hasn’t hit puberty yet or either way too old for said fangirl.

That’s not who fangirls really are.

A lot of people don’t think about what kind of fangirl they are – they just are one.

What kind of fan girl I am? That’s so hard. I would say I’m a loyal fangirl. Like so many of us, through thick and thin, my love hasn’t wavered at all.

You can go to any website on the internet to find various lists of “types of fangirls.” As we mentioned in the Introduction class, the girls over at Fangirls Night Out discussed several different types of fangirls on their very first episode.

We are going to break it down a little more. We are making a quiz to find out which type of fangirl you are.

So what kind of fangirl are you according to the quiz? This is where you have to sit down and think if that’s who you really are?

I’m going to break down the types of fangirls even further than just the four that you can get as an answer on the quiz. This will kind of help you see that maybe you are or you aren’t really that type of fangirl. Or you may just realize you are a good mixture of two types.

Since several types fall under two categories, you may see some duplication.

I’m a dedicated fan who loves to share my passion for the [Backstreet] Boys. Trying to be an inspiration to others and give a listening ear when someone needs it.

For instance, I am probably 70% Professional Fangirl / 30% Typical Fangirl. Both of those categories are very similar, except that Professional Fangirl is a bit, well, more professional. We don’t cry every time we see Nick in person and most of the time, have no idea where the Jonas Brothers are staying.

I will be the first one to admit that I am addicted to the Backstreet Boys, especially Nick Carter. I tell my family or co-workers when they try to laugh at me or make fun of me, that, “Hey, I could be addicted to worse things like drugs and alcohol.” I mean, it’s the truth, right?

Fangirls can get addicted to anything – a movie, television show, actor, actress, singer, band, even a book series. But there’s nothing wrong with that. For the most part, it’s a healthy addiction.

It’s just how you express yourself that makes people think something is wrong with you and that the addiction is bad.

For instance, I have labeled myself a professional fangirl for years. I take my fandom (Backstreet Boys) very seriously and have pretty much from the moment I became a fan on May 1, 1998. (Yes, I know the date).

I would say I’m the obsessive type of fangirl. When it comes to my boys, I’m very passionate and feel every little thing that includes the boys or Nick 150%.

I’m also super emotional and defensive about them.

Don’t like who you think you are as a fangirl?

I have been at the point before where I didn’t like myself and who I was in the fandom. I was known, in simple terms, as a bitch. Some people still think of me that way and in some ways, I am one, but I’ve used that bitchiness to strengthen other areas of my life.

I got tired of being that person and how people saw me. I started thinking about the fact that to some people, when they think about the Backstreet Boys, they think about me, and I don’t want them or anybody else to think that way about me. So, I used that determination to kind of better myself.

It’s all about changing your habits

Do people look at you as the crazy obsessed Nick Carter fan who would probably hide in his bushes? Then change your habits. Think about what you’re tweeting before you tweet. Think about the things that you tweet to Nick when he comes on Twitter for one of his tweet sprees.

One thing that I have learned over my 20+ years in the fandom is that if you treat the guys normally, they relish in that. They have people screaming at them all the time, wanting a piece of them, etc. I learned the first time that I met Nick that if you treat him like a normal guy, he will give you all the attention in the world.

People like to use the term “stan” like it’s going out of style in the past few years. I “stan” that. I “stan” Harry Styles. Do you know where that term came from?

On Eminem’s second album, “The Marshall Mathers LP,” he had a song called “Stan.” The song was about an obsessed Eminem fan who wrote Eminem letters constantly and never heard anything from him. The guy had mental problems and ended up locking his pregnant girlfriend in the trunk of his car and ran off a bridge with her. The song ends with Eminem writing Stan back only to realize at the end that the story he heard about on the news was in fact his fan, Stan.

It’s also been said that the name “Stan” was probably the perfect mixture of “Stalker” and “Fan.”

In 2001, rapper Nas used the term in his diss-track “Ether,” which is really the first usage of “stan” as a verb.

Somewhere along the way in the past 20 years (because the song was released in 2000), the term has become a verb. I know the younger generation (God, I sound old saying that!) uses the “stan” term, but I will always think of it as something negative.

I would have to say the protector. I think I’m this type of fangirl because any time anyone says anything bad or negative about the [Backstreet] Boys, I go straight into defense mode. Like I refuse to let anyone talk about BSB in a negative way, because they have helped me get through some rough times.

Regardless of what type of fangirl you are, own it. Never be ashamed of who you are as a fangirl. Whether you work in the corporate world or you work at a grocery store, own it. Never let anyone make you feel bad for being a huge fan of someone, whether it’s the Backstreet Boys, Harry Styles, the Green Bay Packers, “Supernatural,” or Chris Evans.

Our next class will be on specifically that – owning who you are.

It will be called “Fangirl Marketing – How Do You Want To Be Seen In Your Fandom.”

<< Go back to the main “A Fangirl’s Guide to the Internet: How to Become a Professional Fangirl in the Digital Age” page.

Class 2: Fangirl Personas: In a room full of fangirls, who are you? 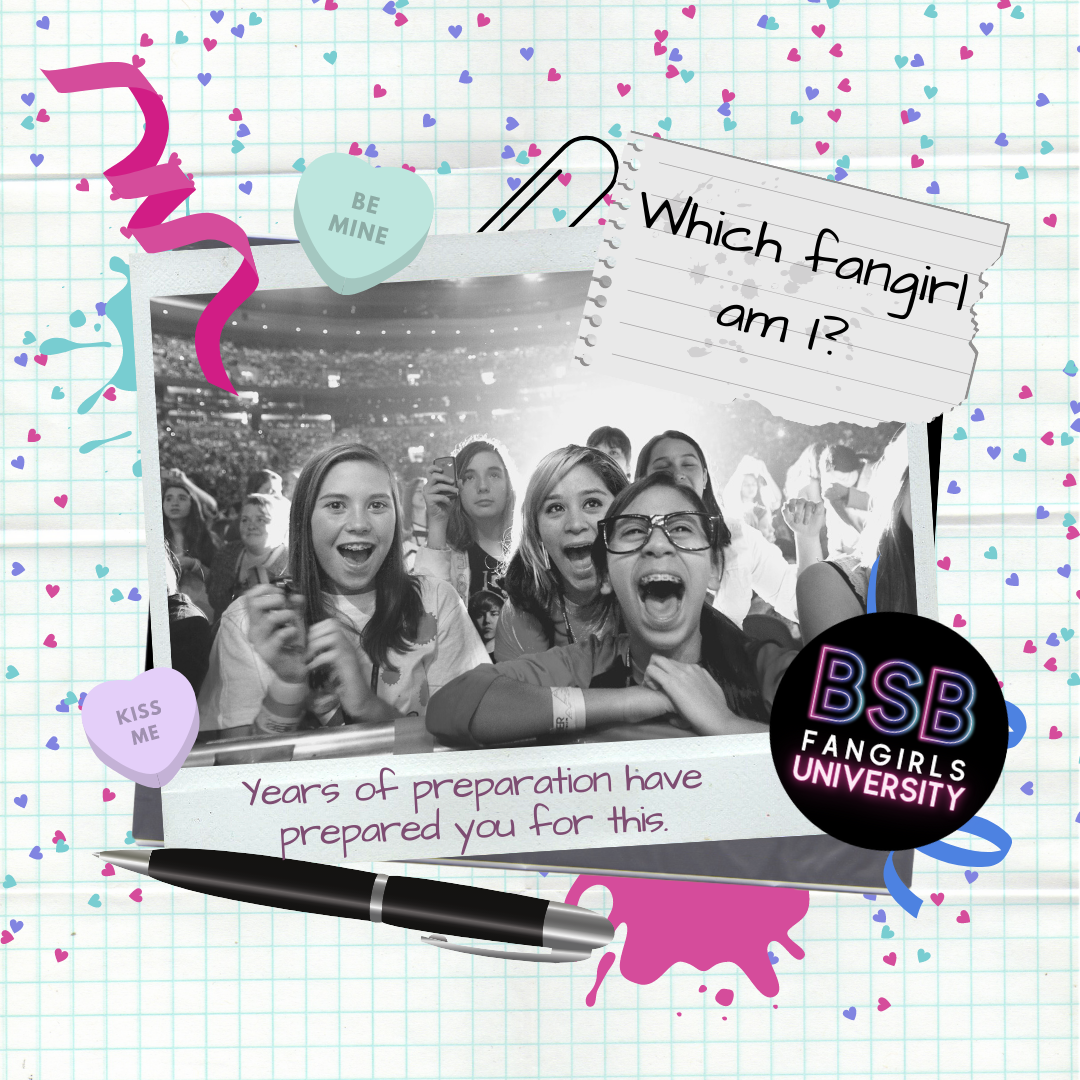 « Thoughts: The ‘Pretty’ Boys in the Band

Fangirl Collecting: Tips on how to start and not get ripped off. »