With the DNA tour postponement and a continued sense of the unknown, all of us Backstreet Boys fans are feeling like the potential to see our favorite guys again is an eternity away. This year has been tough to say the least, but our boys always find creative ways to come through and be there for us, even during a worldwide pandemic. From virtual meet-and-greets to surprise covers and entertaining IG content, all five guys have found unique ways to keep us smiling through the shit show that is 2020.

So let’s embrace the happy moments from this year so far and relive some of our favorite BSB quarantine highlights:

Doesn’t this feel like it was AGES ago?! Back in March, when Coronavirus was still something new that we were just starting to get used to, iHeart Radio hosted a ‘Living Room Concert Series’ on Fox. We all watched excitedly as our boys came together from their own living rooms for a virtual performance of ‘I Want it That Way.’

Back in April, Brian blessed us with a series of selfies as he held himself accountable to a 30-day workout challenge. Uhh, Bri, we don’t think we ever got an update on all 30 days…just sayin… 👀

AJ’s Cover of Love on the Brain

Also in April, AJ surprised us all with an epic cover of Rihanna’s Love on the Brain. Let’s have another listen, shall we?

In May, Howie paired up with chef Katsuji Tanabe to host a virtual version of his popular series, Howie Eatz. Proceeds were donated to The Trotter Project and CORE as fans purchased tickets for this interactive cooking experience with a Top Chef star and a Backstreet Boy. A recipe was even shared beforehand so that fans could follow along and cook with Howie! Such a creative way to give back to the fans AND to charity, right?! Now how about a collective, “Awwww,” for Sweet D?!

Kevin Being a Social Justice Activist

It really warmed our hearts and made us proud to be BSB fans when we saw Kevin not only posting about anti-racism, but also attending protests with Kristin—all while wearing a mask! 😉 We stan a responsible social justice warrior! ✌️❤️

I am standing beside you – open, listening, looking inward and committing to change. Loved being a part of my community’s peaceful protest. We don’t have to hate one to stand by another. We just have to let go of ego, be honest and see where change must happen – and it must happen now. #blacklivesmatter #blm #vote #onelove 🖤 My friend @sybilspeaks wrote an impassioned article which I would love for you to read. Another great resource towards understanding. Link is in her bio. Mask by @clademan 😷

For two beautiful nights in July, Nick treated his Fanclub to a special live stream followed up by 1-on-1 Looped calls, which served as a virtual meet-and-greet experience during this time where we unfortunately can’t do the damn thing in person! It was so fun to see Nick in his element, just playing around in the studio with friends and singing some of his favorite 90s grunge rock songs.

All I Have to Give Radio Show

Saying that we freaked out when this was announced is an understatement. Last month, we were pleasantly surprised with a new radio show on Apple Music hosted by our five favorite guys. It was so fun to just hear their voices again—and in such casual conversation, too! Our only complaint is that they haven’t been very clear on the schedule for upcoming episodes and we are DYING FOR MORE!

Return of the Pancake Daddy

We are BIG fans of Nick Carter’s role as a dad, and anytime he live streams on IG while cooking breakfast for his little ones, our day is automatically made. He’s blessed us a few times with pancake making tutorials, but at a certain point during quarantine, the frequency of this content slowly started to decrease. Alas, have no fear! Pancake Daddy made his triumphant return on August 21, and we lost. our. shit. #pancakedaddystans

The most recent (and potentially most promising) news is AJ’s spot on season 29 of Dancing with the Stars! We LOVE this news because with the assumption that our boy will stick it out till the end, this gives us quite a bit of fresh BSB-related content in the coming months! AJ ALL THE WAY!

We’re going for the mirrorball, baby!! I am so grateful to @dancingabc and @abcnetwork for the opportunity to be joining this season’s cast of #DWTS. I also want to thank my wife and my two girls for letting Daddy go on this new adventure. I’m doing it ALL for you! pic.twitter.com/D7K7SY1F1D

And that was just the tip of the iceberg, folks!

What were some of your favorite BSB moments from this year?

Many Ways The @BackstreetBoys Have Kept Us Smiling During Covid-19 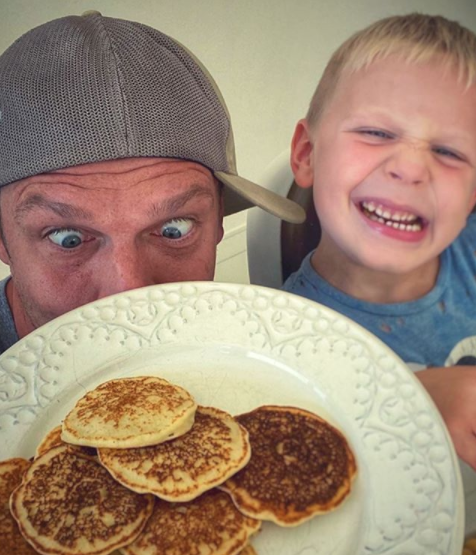