A look back at @BackstreetBoys cruise themes - BSBFangirls.com

The Backstreet Boys Cruises have always been a good time, but one of the most interesting and fun parts of the cruises are the theme nights.

What’s a theme night? A theme night is where there’s a certain theme that you dress up in. For instance, if someone hosts a pink night, everybody would dress in pink. Country night? Plaid shirts, cowboy hats, cowboy boots.

Each Backstreet Boys cruise has had three to four theme nights, depending on the length of the cruise.

Let’s take a look at each theme night.

On the very first Backstreet Boys cruise, the boys were in their “This Is Us” era and without Kevin Richardson. They had very “This Is Us” themes with two themes being inspired by songs on the album.

International Luv night had the guys and fans dressed up, representing where they were from. In one famous move, AJ McLean wore a kilt with tightie whities underneath.

The other album inspired theme was Masquerade night where masks were a must. The last night, another song/album theme, was Black and Blue night, where everybody dressed in the most famous Backstreet colors.

The Backstreet Boys stepped up cruise themes in 2011 with PJ night, Prom and ’80s/Sphynkter night. The fictional rock band Sphynkter made an appearance, taking the stage to sing along with “Just Want You To Know” before looking out at the crimped hair and tulle party skirts.

Prom night was even more special with Kevin Richardson rejoining the group, dressed as if he was taking the stage in “Chicago.” AJ and Nick Carter dressed like the characters from “Dumb and Dumber.”

Pajama night ended up a little crazy with rain causing the festivities to be moved inside the atrium. Nick dressed as a Ninja Turtle while Brian Littrell had on Elmo pajamas.

After a year off from cruise festivities, the boys, including Kevin who was experiencing his first full cruise, kicked things off with three interesting themes – Neon night, Bachelorette Party and Halloween.

Neon glow sticks, face paint and t-shirts were the star of the party to kick off celebrating 20 years of being a band. Bachelorette night ended up with the Backstreet Boys dressed as Chippendale dancers.

Huge bras were thrown on stage and huge inflatable body parts were thrown around the audience and stage before AJ came out in something that was straight out of “50 Shades of Grey.” Halloween night brought the boys out as the Village People and other fans dressed in their favorite Halloween costumes.

The 2014 Backstreet Boys cruise brought one of the most anticipated and creative theme nights of any of the previous cruises – ABC (Anything But Clothes) night.

The first night, a ’70s/Disco themed night, brought back memories of the decade party on the 2011 cruise. The Backstreet Boys looked as if they had walked just out of “Saturday Night Fever.”

Halloween night put the 2013 Halloween night to shame when the boys came out as characters from “The Wizard of Oz,” complete with Nick in a Dorothy dress, sparkly red sneakers and a basket with a stuffed dog inside. Brian was the Cowardly Lion, Kevin the Wicked Witch, AJ the Scarecrow and Howie as the loveable Tin Man.

But ABC night put a cap on the trip, with Howie dressed as “100 Kisses,” Brian being U.S. Mail, AJ being a concession stand, Kevin as a duffle bag and Nick coming out in nothing but tight blue briefs and a luggage mat wrapped around his waist.

In 2016, the fifth Backstreet Boys cruise went international to Europe. The Mediterranean cruise took off from Barcelona with stops in France and Italy before having a day at sea. That meant we had four theme nights since it was a longer cruise.

The first theme night was “Feels Like Home” where fans dressed up to show where they were from. Nick obviously dressed up like a Tampa Bay Buccaneers player. The second theme night was a movie night theme, which was perfect because we were docked in Cannes, France during the historical and regal film festival. The boys’ dressed up in a group theme – Star Wars which led Nick to dress like a girl for the second cruise in a row – Princess Lea.

The third cruise night was Casino Royale where everybody dressed in their best diamonds and pearls and the boys wore suits and tuxes. The final theme night was the friskiest yet – 50 Shades of Backstreet. Let’s just say there were some whips, handcuffs, masks, and naughtiness.

The sixth Backstreet Boys cruise was originally set to go to Grand Turk, but due to a tropical system, we made a stop in the Bahamas, but that didn’t stop us from having a good time. Again, there were four different theme nights.

The first theme night was High School night, where we all dressed like we did in high school. The boys all took on different high school personas, with Nick being a nerd, Kevin being a hippy, Howie being a stylish Rico Suave, Brian being a jock and AJ being the intellectual bad boy.  The second theme night was Comic Con night, where the boys all dressed like comic book characters.

The third theme night was Millennium night, which might go down as one of the greatest theme nights ever on a Backstreet Boys cruise. The boys all came out in white, like on the album cover, and performed the entire album. Then they kept performing. It was a magical night. The final cruise theme was 90’s night where you might have expected them to come out dressed like they did in the 90s, but they came out as the Spice Girls.

2018 was a legendary cruise for themes.

A look back at @BackstreetBoys cruise themes 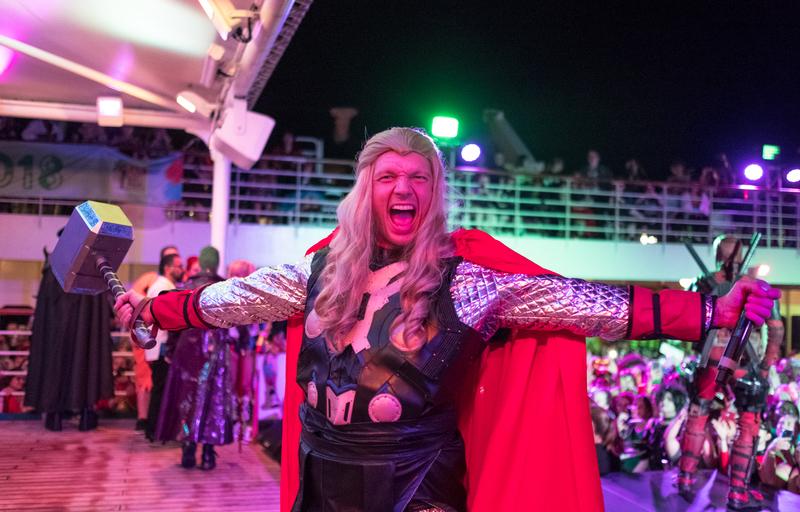 Videos: @BackstreetBoys perform “I Want It That Way” with Jimmy Fallon, The Roots in ‘Classroom Instruments’ segment »