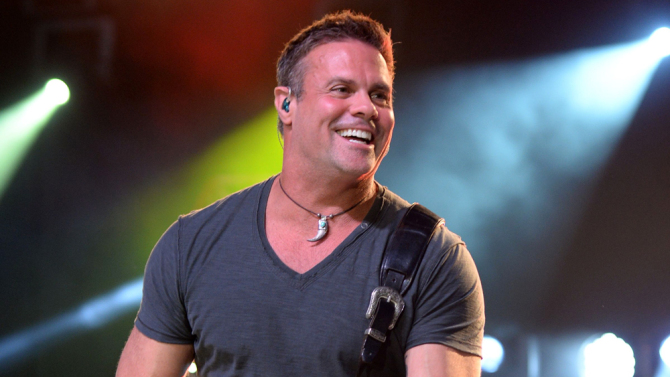 My face when I saw the front of TMZ after logging onto my computer at work this afternoon was complete shock – Troy Gentry, half of the country duo Montgomery Gentry, died in a helicopter crash in New Jersey.

While most of my fangirling on here has to deal with pop music, my heart is country music and Montgomery Gentry is one of my favorite duos. 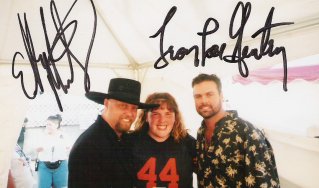 I met them for the first time in the photo above, at a country music festival in Florida sometime around 1999, 2000 when they first hit the country charts. I met them several times after that including almost four years ago when they came to where I lived at the time. I got to interview Troy and we talked for a good 30 minutes about the industry, how things have changed and just things in general. He even gave me a pass to come back and meet them at the show.

It’s been 14 years since Eddie Montgomery and Troy Gentry, better known as the rocking country duo Montgomery Gentry, released their first single in 1999, but the two are still kicking up a storm with audiences across the country and the world.

Montgomery Gentry will be bringing their own unique style of country/rock to the Georgia Theatre on Saturday for a rare college town tour that they are taking part in. Other stops on the tour include Knoxville and Columbia.

“We had talked earlier on the year about doing some smaller places and get back in that kind of scene,” Gentry said. “We kind of grew up playing those kinds of clubs, and we thought it would be fun to go back, especially during football season. We’re big college football fans so we thought it would be fun to come through town and visit some of the clubs and local watering holes.”

The Grand Ole Opry members are known for their country/rock sound and high-energy shows, during which Montgomery is inclined to bounce around the stage, jumping up and down and swinging his microphone stand during their upbeat songs.

“Eddie is still Eddie. That’s who he is, and that’s his personality, and that’s what everybody expects when they come out and see us,” Gentry said. “It’s going to be hard in the smaller clubs to bring out our full set for the lack of space,” he said. “The content of it is the hits. We’ve got a 90-minute show, and because of the hits we’ve been fortunate to have from radio throughout the years, we’re able to keep doing this.”

While the majority of this year Montgomery Gentry has been touring the Midwest and the West Coast, they plan on hopefully focusing on the East Coast next year.

After leaving Columbia Records in 2010, the duo signed with Average Joes Entertainment, co-owned by Athens native Colt Ford. Their latest album, “Rebels on the Run,” was released that same year.

“We’re going back in the studio this winter sometime to start working on our next project,” Gentry said. “We’ve been talking about that the last couple of days. We’re getting ready to start penciling in some dates over the holidays if Eddie can get down here to Nashville and we can get some time in the studio to find some songs and get a new project out for next year to tour on.”

And when the new album comes, Montgomery Gentry fans can expect nothing less than their signature country/Southern rock sound.

“We’ve been very fortunate and been very successful at what we’ve been doing,” Gentry said. ”I know times have changed a little, and country radio is a little different, but with our core fans and the people that still come out and see Montgomery Gentry, they’re expecting to see a certain kind of attitude and style of music when they come out. When we go back in the studio, we’re going to continue to bring that same kind of sound to our fans and to the people that come and see us.”

And fans can expect a jam-packed show but with a smaller feel at the Georgia Theatre on Saturday, even if the guys have been performing together for more than 15 years.

“Anybody that’s familiar with Montgomery Gentry, it’s definitely a high-energy show. It’s still full-throttle once we hit the stage. We only have, I guess, two or three ballads in our show, and everything else is up-tempo and full-throttle,” Gentry said. “We’re looking back to getting back to some of these clubs and keeping it real, getting back to our roots.”

Troy, you will be missed.

Here are some of my favorite Montgomery Gentry songs: