It’s that time of the year. It’s January. The holidays and time well spent with our families and loved ones are now over. We are all back to work and classes, our same old routine that gets boring over time if it is redundant. What do we even have to look forward to now?

We are all patiently (okay, I admit, impatiently) waiting for the new tour dates to be announced for the second leg of the North American and European DNA Tour for next summer and fall. I get it. Post-concert depression is REAL. I miss having the dates and texting all my friends about which dates and cities that we will be going to or if we can try and make it work financially or with our schedules. I miss planning my outfits and how I want to wear my hair and makeup for my meet and greet pictures. I miss debating if I am going to purchase a meet and greet or not when I know FOMO will get the best of me and I will end up buying one anyway and wonder how I will pay it off another day and just enjoy that moment I can never get enough of. We can all relate, right?!

We need this back in our lives again! I feel like it makes my workdays and normal adult life routines go by quicker when I have something on my calendar that I love that I get to look forward to.

Last year at this time, I had just entered the fan club contest to win passes to Good Morning America and the iHeartRadio album release party and had that thrill of waiting to see if I had won. I was so excited that I was getting the chance to see the guys again (I did win and it was such an incredible weekend in NYC last January)!

However, if I didn’t win, I knew I had my trip to Vegas three weeks later in February that I was so excited for that I could not stand it. As I was thinking about how it feels strange to not have Vegas to look forward to this winter and spring, that is what dawned on me and inspired this piece to create discussion among us all: while we would REALLY love to see the guys on their tour dates again this summer, I feel like what we are really missing is another Backstreet Boys Vegas residency!

I have had a discussion with a lot of my friends in the fandom, and I am getting the vibe that we have all agreed that we have found ourselves missing Vegas more so than missing the DNA Tour at times. Now don’t get me wrong, I will attend any concert or tour date that I get the chance to see the guys. However, I have reasons why I would almost rather have a Vegas residency instead of the upcoming second leg that is about to be announced. Hear me out.

Why do I prefer Vegas?

First of all, one of my favorite parts is that I get to make a vacation out of it with my friends and that it is a location where many of us have the opportunity to meet up in one place. I know it can get difficult for people to see friends in many cities during tour, as I am a teacher, so if it is not during summer vacation, taking off work several days over a course of a few weeks to go to different cities across the country or continent just isn’t going to work as an elementary school band director, and also that it gets very pricey if we need to book several flights to get to said cities during the span of those weeks.

Now while most of us need to book a flight to fly across the country to get to Vegas, as I am in Delaware on the east coast, I find that the price of that 5-hour flight can be more justified since we know we have an opportunity to attend all 3 shows in a week during the Vegas run of the month that they are scheduled in Vegas.

With friends at a DNA Tour After Party in Philadelphia, PA on August 17, 2019

Now I know not everyone has the chance to go see all three residency shows during that same week. but it is a lot easier taking just one flight there, booking a room at Planet Hollywood, and voila, you are already there for those 3 shows! No driving long distances to shows that may fall days in a row or that are in the same week.

The money spent on gas for all the driving and hotel rooms in separate cities can almost be equivalent to the price of a round trip flight to Vegas.

I also miss the routines and traditions we’ve all started during the residency. Planet Hollywood almost felt like a second home to me. I miss getting breakfast at Cafe Hollywood, seeing friends in line at the Starbucks for that pre-meet and greet coffee, as I always needed a pick me up after being up late from the after-party the night before! I miss making appointments at the DryBar and Sephora right downstairs at the Miracle Mile mall and seeing all of my friends there at the same time, while sipping on a drink, reflecting on our favorite memories from the night before, all while being pampered.

Others even had talented friends in the fandom who did their makeup for them in their hotel rooms. I miss picking out fancy Vegas outfits. Vegas gave me the excuse to go all out and get fancy.

Vegas made me feel beautiful and excited to see everyone at meet and greet and the show later that night. These Vegas traditions that I have made with my friends actually carried over to the DNA Tour with getting a pre-concert blowout for my hair and getting my makeup done.

I had just gotten so used to my makeup and hair looking so on point for my meet and greet pictures in Vegas, well, they had to look on point for the DNA Tour, too, right? However, sometimes it’s not so easy finding a Sephora or DryBar/salon to get pampered before each DNA Tour stop, and the money would add up. My poor wallet! Planet Hollywood and the Miracle Mile Mall were just so convenient, and it spoiled me!

Vegas gave me the excuse to wear fancy outfits with sequins and it made me feel beautiful!

While seeing the packed, sold out arenas with screams and hearing the entire arena sing every single song brought back that 1998 nostalgia I felt when I was 13, I still really missed the intimacy of the Vegas shows at Zappos Theater. I had the opportunity to see two Vegas shows at VIP tables 8 and 3, and one more show in the pit, but the experience at the VIP tables is something I will never forget. Being elevated to their eye level of the performance almost made me feel like I was a part of the show. Having space for all of us to be able to stand comfortably and not worry about losing their spot when we had to use the bathroom. Having somewhere to sit was pretty clutch too, as my feet really start to hurt after standing for a long time. Even if you didn’t have a table or pit ticket, there was not a bad seat in the Zappos Theater. If you wanted to buy a last minute ticket the day off in the upper section of the arena, you still had an incredible view. Often times for arena shows, the tickets sell so quickly or some close seats get extremely pricey and there are fans that sadly don’t get the chance of seeing the guys up close. The Vegas residency helped fulfill that wish for so many.

At the end of this article, I am still here waiting for those tour dates. I miss the guys as much as you all do, too! However, if a new Vegas residency were to be announced instead, I also wouldn’t be mad about it.

What are your thoughts if this were to happen? Do you prefer another Vegas residency or the tour? I can’t wait to hear your thoughts. Let’s get the discussion going!

Thoughts: We loved the DNA World Tour, but want another @BackstreetBoys Vegas residency! 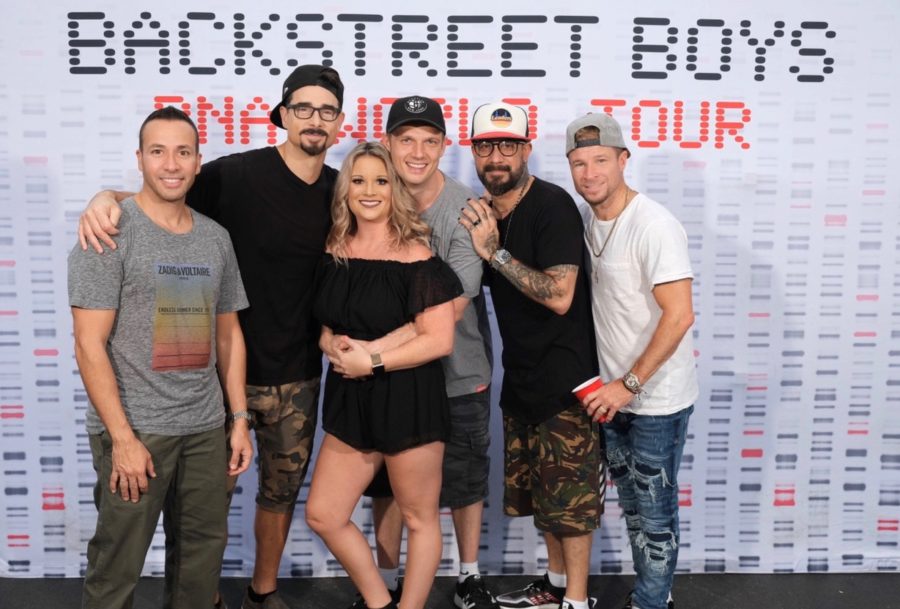 3 Comments on Thoughts: We loved the DNA World Tour, but want another @BackstreetBoys Vegas residency!

« Ask the Fangirl: What was your favorite part of the @BackstreetBoys DNA Tour?

Flashback Friday: Two @BackstreetBoys videos are better than one »