Review: @HowieD's "Back In The Day" is a labor of love - BSBFangirls.com

There aren’t enough words or emojis or well, anything really to say how proud of Howie D I am. His vision, along with Tor Hyms and Lisa St. Louis came to life in such a magical way on the stage in Omaha.

“Omaha…really?” My exact thoughts when I found out in somewhere near the end of 2018 that they (Howie and his writing partners) had picked The Rose Theatre to debut, Back in the Day. Not exactly where you would think a musical to make it’s world debut…but after seeing the show, it was the perfect place.

A labor of love for all three of them but more so for Howie. Being a little vulnerable in sharing parts of his past. He was bullied as a child…kids used to pick on him and call him, Doughboy in middle school; which is where the musical takes place.

You’re transported back to middle school. A time where Howie was trying to figure it out, who he was meant to be. Parents who…wanted different things for him. A mother who supported his musical interests and a dad who would rather him become an, astronaut. Howie shows us how, with the help of his friends; Tommy, Oba and Lucy that he can be what he’s meant to be. They saw something in him…the me he was meant to be. Even if his sister, Pollyanna didn’t, at first.

The play is very loosely based on Howie’s childhood. Those that know him know… there are obvious differences.

His real-life sister Pollyanna actually called me Sunday night of the first week to remind me that…‘I am nothing like that Pollyanna.’ She went on to say:

“First of all, Howard warned me ahead of time that the writers made me look like a villain and a bi*%#, in his play to add spice in the story. I guess our real life was too boring.

We ALL adored Howard as a baby and had to take turns changing his diapers (except for Johnny.) We are a very close and loving family and we all continue to support each other every day.

So, let’s set the record straight for EVERYONE seeing his play:

Hopefully you will now see that his play is LOOSELY based on his life. The play is designed to teach children how to deal with many different challenges that they may have in life. Show them how to conquer their fears, and to encourage them to follow their dreams.

I hope that this will encourage everyone to see his play “HOWIE D BACK IN THE DAY “ and buy his album “WHICH ONE AM I?”
Sincerely, Pollyanna”

We knew all along that Polly couldn’t be the way she is portrayed in the musical.

The songs are so catchy that I still find myself singing a number of them. Especially one number where Howie wishes he just wasn’t here. “I’m not here, your not here, we’re not here…nobody’s here.” I think we can all relate to this one.

The cast is amazing, definitely Broadway-caliber on a small scale. All are talented in their own right and bring such a great diverse background to the musical. Everyone at the Rose is so friendly and welcoming. I’m actually a little sad to not be seeing any of them anymore.

All in all this musical has a message for everyone…to stand up and shout. To be the change you wish to see. To ultimately be the, me you were meant to be.

There are talks for the musical to be shown in Orlando…Howie said; “if the timing is right, he’d love to.” Also some talk of a cast recording. So…I certainly hope that this Sunday as the last notes hang in the air, this isn’t the last time we hear or see: Howie D: Back in the Day.

Review: @HowieD’s “Back In The Day” is a labor of love 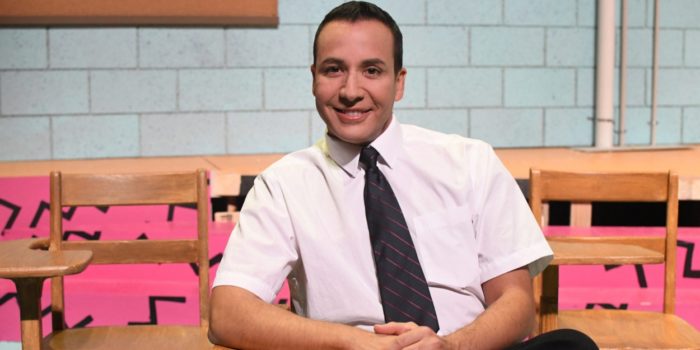 « Thoughts: All concert seats should be created equal, even for disabled fans