Author’s Note: I have warm, fuzzy feelings when I think about each Backstreet Boy. This will be part of an ongoing series which covers first impressions of the boys.

1996. The year I became a fan. I can tell you that this wasn’t the year that I fell head over heels for Nick Carter. Nick and I are 8 years, 8 months and 2 days apart. He’s the youngest member of the Backstreet Boys and he was my least favorite member for the longest time. Sure, I loved him like I loved the others but I just didn’t get what the big deal was. Why did every girl fawn over this kid? Even if I was still a kid myself, I personally liked tall, dark and old as dirt…sorry Kev.

My first impression of Nick on the red album was that of a generic, Ken doll wannabe. His hair was awful and he sounded so nasally. Yet every girl I knew was completely in love with Nickolas Gene Carter. For some reason, even the girls who had pledged their allegiance to Brian or AJ were jumping ship and riding the Carter train.

As time went on and I got older, Nick’s sound began changing (well duh, hormones) and he became a bit of a badass. I didn’t agree with the things that went on in his life and I wasn’t interested in getting to know him. Plus I still didn’t get the hot factor.

Fast forward to 2014. I have an opportunity to go to a Backstreet Boys show with my friend from work. On stage, the Nick I saw was a completely changed man and I barely recognized him.

Shit, when did Nick get hot? Why did no one tell me that he was so charismatic on stage? Why hadn’t I been a part of the Nick club?

My first real encounter with the man himself was at his pre-cruise event. He walked into the room and I was like fuck, I’m actually going to meet Nick Carter in a few minutes. Suddenly panic set in. I’m a pretty talkative person but all of a sudden, I was not. What was I going to say to him? I had no clue because all around me, I was surrounded by Nick girls who knew his entire life story.

By the time he came around to our table, I was several rum and cokes in. I wasn’t drunk but I was feeling pretty good. I had been flying the day before and really hadn’t slept much, so it increased all my feelings by 200%.

He went around the table and finally said “Hi” to me. I was the only one who wasn’t standing up. Sensing I was nervous, he asked “how are you doing, sweetheart?” It took me 2 seconds to realize he had asked me a question and I shot right up out of the booth;  almost knocking him over. How embarrassing?! I don’t think I ever answered his question and I just asked for a pic. Not sure if I said please or thank you or anything of the sort. How rude?!

Nick just smiled in Nick’s charming way and we took the following pic. As you can see, I’m SHOOK. I fell in love with him instantly and for a second I thought my love of Kevin was a thing of the past.

It’s been a few years since that moment and I can confidently say that once I regain my composure (he still kinda affects me to this day), talking to Nick is always a wonderful experience.

I’m so proud of the man he’s become and how he’s persevered during tough times. I love that he knows that he’s my number two and that he always tries to get me to come over to the dark side. I might not be a Nick girl,  but I now know that we have the same taste in music and I can talk about our mutual love of pugs if I ever get dumbstruck by his appearance.

This is a part two of a five-part series on Andie’s first impressions of each Backstreet Boys member. 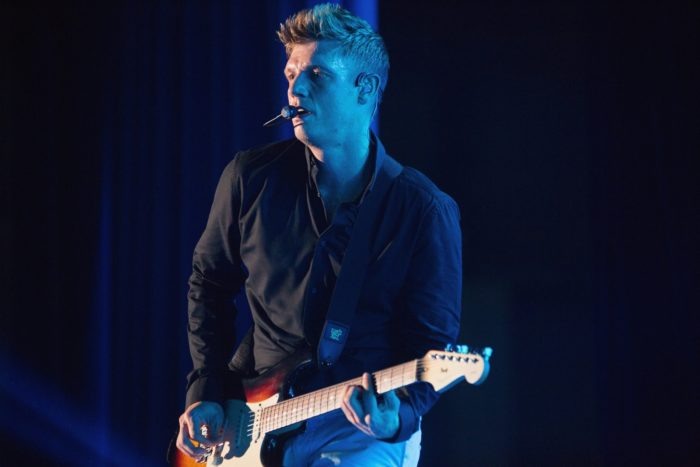 1 Comment on First Impressions of a Backstreet Boy: @NickCarter