When did you become a full fledge fangirl?

I think I was born a fangirl. I don’t know how or when it began, but there are moments of my life that I look back on and it all kind of makes sense. Whenever I started to like something, I go all in.

I have an obsessive personality, which I never realized until the past few years, but it really makes me realize that I was always meant to be that passionate fangirl who lives and breathes for the things that makes her happy.

My fandoms have always been my happy place. The Backstreet Boys fandom has been my happy place for almost 22 years now. It’s the place I go to when things get too dark or too serious or when I just feel like I have no purpose anymore. It’s given me a real family that I felt like I never really had because my real family never really understood me. It gave me the sisters that I only dreamed of.

Basically being a fangirl has saved my life.

On this Transformation Tuesday, I thought I would take a look back at the fandoms that shaped who I am.

Remember the cartoon from the ‘80s about a normal girl who has a secret identity as a pop star? It was the “Hannah Montana” before “Hannah Montana.” It was everything to me. I had the dolls, the books, I think I had a poster. I wanted pink hair like Jem and the earrings that she/Jerrica wore.

I know as a 7-year-old, I probably shouldn’t have watched “Dirty Dancing,” but my Mom never hid me from stuff. I had rap cassettes as a little kid because I loved the Fat Boys in the movie “Disorderlies.” But as that little girl that loved Patrick Swayze, I went to the movies to see “Dirty Dancing” at least five or six times. I had a “Dirty Dancing” t-shirt that they wouldn’t let me wear to school. It had my name on the back. I had the shorts like Baby wore in the movie and the little white shoes. When the movie was released on VHS, my Mom talked the lady at the rental store to make a bootleg copy of it for me. I had the soundtracks – both of them because yes, there were two – and listened to them religiously.

NEW KIDS ON THE BLOCK

I fell in love with New Kids on the Block around the same time as “Dirty Dancing.” I got their first cassette, the one with “Popsicle.” I thought that smallest boy on the front was the cutest boy I’d ever seen and that I would marry him. (Yes, back when I thought that’s what was supposed to happen.) After that came “Please Don’t Go Girl” and they blew up and they became my life. Their “Hangin’ Tough” tour came to my hometown and it sold out before my Mom and Aunt were able to get tickets for my cousin and I and I cried myself to sleep that night. I thought my life was over. Two years later I finally got to see them on their “Summer Magic” tour.

The queens. I became a fan of Whitney Houston’s when I had to perform “The Greatest Love of All” during my kindergarten graduation. Since then, she was one of my all-time favorite singers along with Reba. I remember sitting in the hospital waiting room in 5th grade when my grandmother was in ICU, listening to her album with “I Wanna Dance With Somebody” and “How Will I Know” over and over. Then came Janet. I liked Janet, but when “Rhythm Nation 1814” came out, I became obsessed. I wanted to wear a key on my earring. I had a black T-shirt with the album cover of Janet’s album that I wore all the time. Probably too much.

I became a fan of Garth Brooks in the midst of my NKOTB fangirling when his self-titled album came out in 1989 and while I always listened to country music because of my Mom and loved Reba, I became obsessed, especially after his “Ropin’ The Wind” album. I was in middle school and NKOTB had started to fizzle out. I became obsessed with country music and Garth and had to learn everything about it. I checked out books at the library. I bought all the country magazines. I had those weird button-up shirts that Garth wore that had flames coming up at the bottom or checkmarks. I wore cowboy boots. I was this way up until May 1, 1998 when I got a new obsession.

In 1994, a new television show came on NBC and I immediately took to it. Why? I don’t know. It wasn’t like the typical show I would watch. But I did and quickly became more obsessed during the summer reruns. When it came back on TV, it was the biggest show in the world. I got the T-shirts. I got a watch that would play the theme song at the top of every hour. I even got the Rachel haircut, highlights and all. Because while trying to dress like a country singer, I wanted to also be like Jennifer Aniston. The show was my safety net after my Grandmother died and I fell into depression. To this day, I’m still obsessed.

In the words of Sophia from “The Golden Girls,” Picture it, Orlando, 1998. I was a month from graduating high school and I’m at Disney World for “Grad Nite” where high school seniors from across the country come to Disney World to party all night. There were concerts, including Rhett Akins, a country singer from my hometown (Thomas Rhett’s father), and a boy band that I didn’t care for. That is until I made my way up to the front to take a photo for my cousin’s kid and Nick Carter pointed at me asking if he was sexual. I said yes. The next week at school, I got on the one computer in our school that had dial-up and looked up information and that was the beginning of this – this site, my life.

Since high school, I had been a NASCAR fan. First I liked Jeff Gordon, but I grew out of it during the time that I became a huge Backstreet Boys fan. But around 2004, I fell back in love with it mostly because of a driver named Tony Stewart. Tony Stewart was and is a badass. I became so obsessed with NASCAR that I changed my major in college from creative writing to video production because I thought I wanted to work in the television side of the sport. I did until I worked for a week interning at the Daytona 500 in 2007 and realized i couldn’t live out of a suitcase like that 38 weeks out of the year. I still loved NASCAR until a few years ago when Tony finally retired and I grew tired of the way the way the sport was going.

But have I grew out of Backstreet Boys?

What have you fangirled over through the years?

My transformation into a full-fledge fangirl 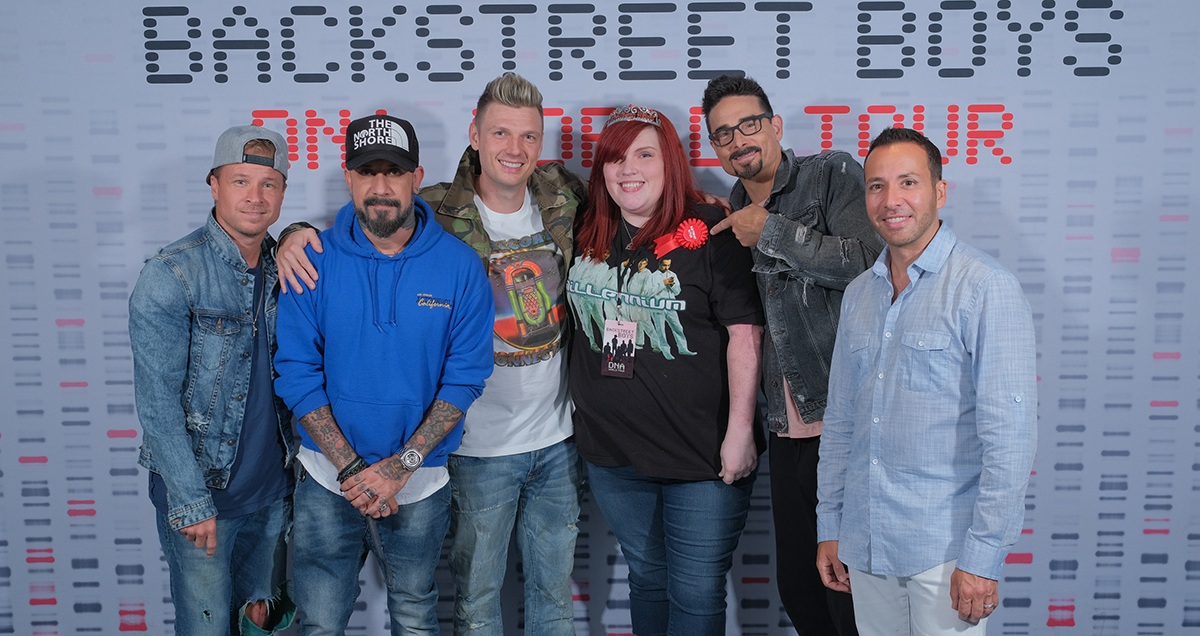