When I first re-joined the fandom in 2014, I wanted to meet like-minded individuals who also shared my love of the boys. I met a lot of great people online and got to meet them all on the 2014 cruise.

I met a bunch more on the 2016 cruise. Back then, I wasn’t as well known in the fandom and had managed to keep a pretty low profile. Life was pretty good then. I was free to fangirl as much as I wanted and no one gave a shit what I did.

Then came Vegas and suddenly I was on a lot of people’s radars. I got to reconnect with people I’d met in the past and then came an online following of new people. Most of these people are really cool and I love them. But as with everything, there are the snakes in the background. At first, the negativity didn’t bother me, but then I kept seeing my name pop up online about what a stalker I was and how I had no life outside of the fandom.

It’s true! I wake up, go to work, go home, hang out with hubs and my dog, then go to bed, only to wash and repeat the very next day. And the initial purpose of me signing up for all of these social media platforms was to talk about the boys since I was well aware that I wasn’t cool.

I think many people are in the same category. They only show the fandom aspect of their lives online and that’s enough for them. I know my friends have other things going on in their lives that they don’t necessarily share online. The people making comments and following your every move are equally as uncool no matter how they try and spin it.

Like the indecisive Libra that I am, I often question why I still bother with this fandom. There is a ton of bull-fucking-shit!

Last year, I had to quit my job unexpectedly and it really put things in perspective. I began having some sort of fan identity crisis. I probably should have sold my existing tickets and stayed home. But my friends still expected me to go to things and partake in them like business as usual.

But truthfully, I wasn’t in a good place and really wasn’t feeling it. I shared some of my concerns with certain friends who told me the magic would come back eventually.

My last scheduled show for 2019 was supposed to be in Calgary. I was fortunate enough that my good friend and fellow BSBFangirl Carrie chose to come and visit me for that show. A few days before she was set to come up, she surprised me with a concert ticket to the Edmonton show. I couldn’t believe someone would be that good to me and would drop that kind of money on me. Immediately, I told her I would pay her back when I was working again but she kept insisting it was a gift and that my year had been hard enough. So we went to the Edmonton show and I had a fucking blast!

Me and Carrie in Calgary

In November 2019, I went to Hawaii with Carrie and our friend Jodi. This trip was a birthday gift from my husband.

I felt guilty since I was still unemployed and had no business spending money on concert tickets, let alone a meet and greet. I also wondered what Carrie would think because I still hadn’t paid her back for the Edmonton ticket. Anyway, against my better judgement I cashed out the last of my savings account and got two tickets and two m&gs. Well, wouldn’t you know that it was the best decision I ever made. We had so much fun and once again the magic was back! I came back feeling revitalized and ready to take on the world. It would take me a few more months to find a job, and thankfully I did in January 2020.

Me, Carrie, and Jodi in Hawaii

About a week after I started my new job, the 2nd leg of DNA was put on sale. I still hadn’t paid Carrie back as she had told me to build up a new little nest egg before doing so. I felt guilty about actually wanting to go to shows. It started making me question whether or not I should still be a part of things since I’d be putting all my shows on a credit card.

I said I’d never go into debt over the boys and I’d like to maintain that. But then came the social peer pressure from BSB society as a whole and before I knew it, my credit card was maxed out. I was excited and then immediately said to myself oh fuck, what have I done? This is usually how my ticket buying goes so it didn’t really come as a surprise. I started planning on how I was going to offload some of these shows when Covid really started being a thing. I really didn’t need 6 shows.

The show I was initially most excited to go to was the Lexington show. People around me had started making plans with their friends and while I usually travel alone, I felt like I was being left out. That made me want to sell my ticket even more. So I did…to my fellow BSBFangirl Kerry. I was happy that I could help a friend out but still felt bad that I was being so wishy-washy about going.

I don’t remember the exact logistics of what happened but fellow BSBFangirls Steph and Karah, decided that I couldn’t skip Lexington since it was the birthplace of bae (Kevin) and of bourbon; my two favourite things. Steph took it upon herself to organize a seating arrangement in the first row at the point of the stage so we would all have a great view even if we weren’t in the pit. The ticket was way more than I had cared to spend and I had let it be known that I wasn’t comfortable with spending that much since the ticket had to be converted to CAD. Steph once again called it a gift.

I truly appreciated the thought and let her know that she’d be paid back at some point (let the record state that Carrie did eventually get paid lol). Our seating arrangement has since changed and I somehow am sitting in a better spot than before with a fellow K girl. The ticket price has increased substantially and I don’t know how I can thank Steph for allowing me to sit there without being expected to pay the difference back. But she knows that it will come back to her at some point whether that be in paid dinners/drinks/etc. I still feel guilty about it and she assures me that she needs me to be there so I will have to let my pride fall by the wayside for a little while longer. 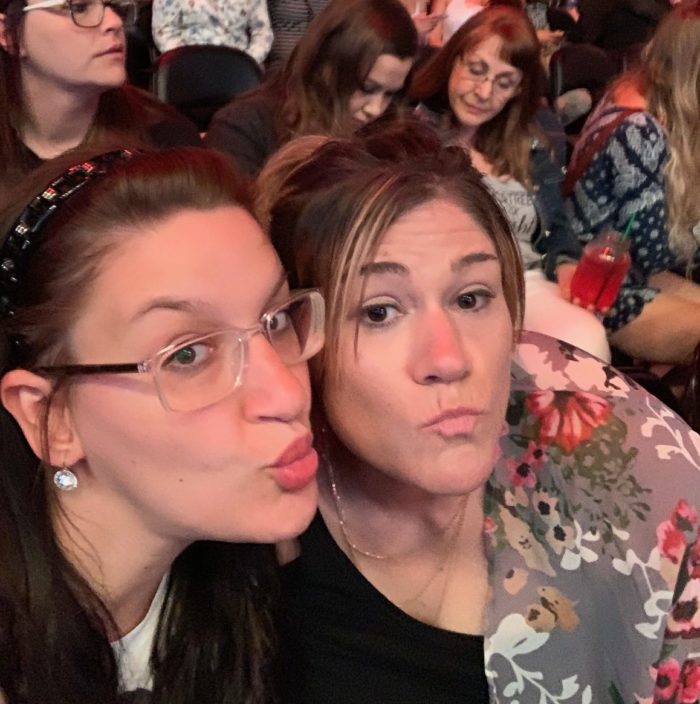 « Personal: And I still can’t see her