In a world (like this) where physically picking up an album is pretty rare, we’re throwing you back to each big album release to give you our two cents on the design of each! And, we’re even going to show you our personal favorites by ranking them from least to most favorite!

But first, let us give you a fair warning:  our opinions here are based on design and overall aesthetic alone—this ranking has nothing to do with the content of the actual albums. So, let’s dive into some nostalgic artwork and iconic looks, shall we? (Lookin at you, Nick’s 1997 bowl cut!)

So, we know this album came out literally a YEAR after Millennium (which, if we’re honest, on #backstreettime that is quite the miracle), but did they um… forget something with this album cover? I don’t know — five handsome men that we fell in love with on Millennium!?

It’s not our favorite because we’re missing our favorite 5 visuals BUT, we can appreciate the simplicity of the design. Not worth the sacrifice in our opinions, though.

The graphics on this design do look very 2005 (and that’s not a compliment!). While we love the warm glowing aesthetic of the photo, this one wasn’t one of our top favorites from a design perspective. The guys’ looks aren’t bad, but if we’re honest, we prefer the fitted suits versus the oversized ones!

Because, hello, who could resist some fitted suits on these five?!

Whoa, we thought they looked like serious badasses before — look at them now! And, while Nick’s bowlcut is the obvious star of the album, we couldn’t help but want to pull Kevin into a 2004 emo band with his whole vibe. 😉

There’s a LOT going on here visually. Our hearts are still tugged into the nostalgic feeling we get when seeing this album, but we couldn’t NOT say anything about all the crazy aesthetics going on here. The brick wall, the grungy feel of the ‘Backstreet’s Back’ font, the metallic vibe in the logo. As designers ourselves, this made us want to re-design it all immediately. But, again, we’re talking 1997, you guys.

So, the movie marquee here is a fun, expected touch. But, we’re not huge fans of the way they’re all positioned in the foreground. And, why are three of them staring + smoldering off in the distance, but AJ is looking spot-on to the camera?!

We do love that they’re “closer” to the camera in this shoot, so we could easily tell who they are from far away. So many of their albums have them a bit further off into the distance. This way, we at least get a closer look at their handsome faces. 😉

Okay, so we’ll be 100% honest with you guys on this one. We disagreed initially on our opinions for this one! While Kelsey really liked the abstractness (and Nick’s jawline), Britt felt like it was a little cheesy for an album called, “Unbreakable”. Because, well, it’s broken?! 😉

This album cover is so classic. The serious faces, the black shirt worn by all five (except Kevin – who approved for him to wear a turtleneck?!) and with the confident look like they KNOW they’re about to take over the next few decades of your life.

Talk about a badass first impression of our boys, right?!

From an aesthetic perspective, we love that they’re wearing all black and how it balances with the red/black in the album title. And, although we’re not huge fans of the font in the album title (that outline, the italics, eek!), we also have to realize it was 1996. And, hey, check out that old school BSB logo!

But, seriously, no more hiding in turtlenecks, Kev. Never, ever, not again ever.

The boys REALLY leaned into the DNA brand when promoting this album over the last year. From taking DNA tests, to 23 videos explaining all things Backstreet Boys, and even naming the tour after it. We’re loving that there’s a bigger theme that centers around the album, versus just a random album name like we’ve seen in the past (lookin’ at you, Black & Blue).

We love the concept of this one, and although it can be a bit hard to identify the imagery at first, once you look close, you can get a full idea of the visual concepts that went along into this album cover design. And, as brand designers, we’re diggin it!

Um, hellooooo power suits?! SIGN US UP. They’re back — Kevin, too! We really love the look of this album. From the blue water, to the gradient sunset sky, we’re so here for it.

The font used here is very modern, leaving it super complementary to the balance the rest of the colors in this photo.

And, hi, again, the suits. We can’t stop staring at those confident stances in the power suits.

ICONIC. Freakin’ iconic. What is there to say bad about this album cover?! NOTHING. The outfits, the colors, the backdrop, the font, everything here is so representative of 1999. And, also, they STILL wear similar outfits TODAY. Yes, 21 years later!

We legit have nothing else to say about this except we’re kind of wondering if we can get a present-day remake of this exact look. 😉

So, what do you think? Do you have specific favorites out of these nine?! Or, maybe one of your favorites is a single release cover that’s not listed here. We’d love to hear your thoughts — while we jam out to these albums, of course. 😉 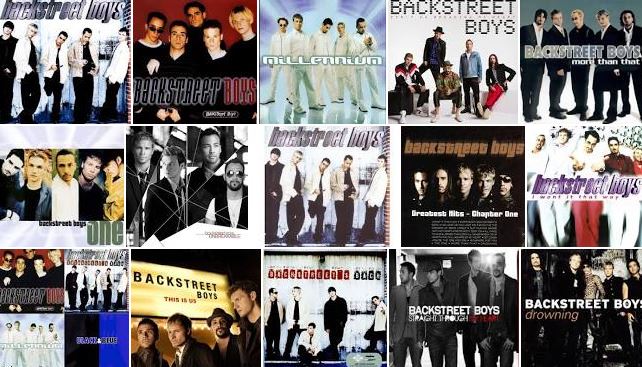 « Site Update: Tough being a fangirl during the #Coronavirus

Guest Post: “I Got You:” How @BackstreetBoys brought Allison & Bailey together »