My Life in this Boy Band Fandom…Part 1

This is going to be my first attempt to type a blog.  I am not a “writer” nor do I claim to be but I just want to put into written form about my life in this thing called boy band fandom as an older fan than most.  A better way to describe this is my Boy Band Documentary, of course you have to say “documentary” like Nick. LOL  So maybe you won’t get bored with my story I will split this up to be a five part series.

As I lay here wide awake 3am, which seems to be the latest wake up time for all us old folk, I started thinking how my life has changed since my youngest graduated high school in 2011. That was the year my current boy band adventures began and little did I know how it would effect my life.

From 1997-2009 I attended around 9 Backstreet Boys shows. During the late 90’s and early 2000’s I was heavy into anything BSB.  I was on Yahoo list, reading fan fiction and chatting, many times naughtily, about these new obsessions of mine.  It was fun, it was liberating, and frankly I needed it.  I was a young mother with two small boys and was missing having “fun” like many of my other friends my age.  Since I married at 20, I didn’t do the party or club scenes, and didn’t want to do it, I was busy going to school and being a wife and mother.  Don’t get me wrong I loved being a mom and wife, but I felt like I had lost a little of myself during this time and my compulsive addictive personality came through and I immersed myself into the fandom.

Sadly, I can’t remember the exact date of my first Backstreet Boys concert, but I remember it was at Lakewood Amphitheater and I used my niece as an excuse to go. We had lawn seats but I was just excited to be there.  I was mesmerized by these five guys.  I had my fave, Kevin.  He was the only one I felt good about “obsessing” over because at least he was close to my age.  The others I felt like a dirty older woman.  They were cute and loved them all, but Kevin stole my heart from the beginning with his tall, dark, and handsome build and sexy voice. Of course, back then we only got to hear Kevin occasionally, in the talking part of “I’ll Never Break Your Heart” and when he did his solo “Nobody But You” in shows.

Since this whole “world wide web” was just catching on, I wasn’t real savvy but I did have my AOL dial up account and when I realized how you could search and find things out there on the guys, well it was on!  I had my little computer and I started looking for things.  I found pictures and wav files of things you couldn’t find on the cd and I was just amazed.  I found websites dedicated to them and then I stumbled across Yahoo List Groups…Oh My Word!  You could find a “list” for things to do with Backstreet Boys, everything from informational to naughty.  I signed up for the general list to get any information I could but there were these other list, the naughty ones, that intrigued me.  So I remember joining one.

I am not sure of the first ones name because they changed as people would have falling outs and such, but the names I remember the most are BSB_Erotica and BSBFans Over 30.  Here on these list were girls/women who loved Backstreet and wrote fan fiction.  People who wrote would post chapters of stuff they had written for people to read and give feedback.  This often generated many other conversations and most of the time they were naughty, but fun.  I made several friends on these groups and we would read and chat until the wee hours of the night.  I even attempted some writing myself.  I have a story that I worked on but never finished as well as some other shorts that I did complete.  This was something fun but it was not something I wanted others in my house to know about and of course that caused issues, but I digress.

When Millennium came out I was all excited and knew I wanted to see them in concert. I remember the tickets going on sale and me going to the local Ticketmaster place to wait in line to purchase tickets.  Yes, we used to have to stand in line for tickets or call. I was so nervous and scared I wouldn’t get tickets…there were all these little girls and their moms waiting with me, but luckily I did get tickets.  They were in the nosebleeds but I didn’t care I was going to see the boys on November 29,1999 and again February 19, 2000.

I continued my friendships on the Yahoo Groups and really enjoyed the whole fan fiction part because it was an escape from reality and I preferred that.  It was amazing that in January 2000 when my mom passed away suddenly how those girls were there for me even if it was from all over the US and some across the pond.  They sent flowers and messages constantly checking on me.  When Black and Blue came out and tour dates were announced our little group decided that we all try to attend a show together, at least the ones on the east coast.  So on January 27,2001 my internet friends came from Philadelphia, North Carolina and Florida and we saw the boys at the Georgia Dome.  It was a great time and finally getting to get face to face time with these girls.  This was also special they came to this show since it was the day before the year anniversary of my moms death. 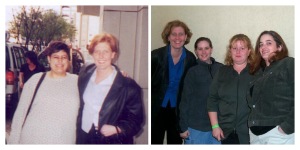 Later that year on June 11,2001 I was able to see the boys again in Atlanta and I had the best seats I had ever had, I was like 20th row, but I was right on the aisle where that suspended walkway was.  I was ecstatic to say the least. While i only got a few good pictures I am proud of at least one of them.

After the Black and Blue tour with AJ having his issues with substances the boys took a break and I started hearing about Nick doing some solo stuff.  I had never been a huge fan of Nick, he was cute and I didn’t NOT like him, he was just so young.  I felt dirty about liking him like it was wrong.   When his music came out I still got the CD and I loved it and you know he is legal and he is kinda cute.  Hello Nick Carter!   I unfortunately was never able to see him perform solo because he never really came where I could.  He did do an appearance at a place like a Dave and Busters in Atlanta but there was some reason, I can’t remember why, I could not attend.   I was not as active online with my friends because we had all gotten busy with real life.  There were a couple I would speak to occasionally but also my kids were getting older and more involved in sports and such, the time was just not there.  Backstreet took a backseat for a while, at least until 2004.