I want to talk about Baylee Littrell. Karah and I enjoyed his special VIP experience. It was the 1st time his meet & greet was part of his soundcheck.

After soundcheck we had a few minutes for Q&A. I was a little annoyed that only Karah and I asked questions about Baylee himself and not just BSB or Brian. I told Baylee that I was a parent of a child with Autism and that Chloe LOVES his music. He thanked me for letting him know and was truly touched to hear that. Then it was time for our picture.

I already talked about how the rest of my evening went. It was AMAZING. But now I was home and again suffering from PCD. No more BSB events scheduled. The DNA tour had wrapped up in Hawaii in November. The weather here in Michigan was turning colder each day, it was getting dark earlier and I was getting depressed. I didn’t know when I would see my friends again.

Thank goodness for Baylee. Baylee’s debut album 770-Country was being released November 15th. His very first headlining show was at Eddie’s Attic on Tuesday, November 19th in Decatur, GA. You all remember who lives in GA? Exactly… KARAH!!!!! I thought convincing my husband to let me fly to Vegas for 48 hours was tough, I now had to figure out how to fly to Atlanta, GA for just 18 hours.

I know others had alternative motives to see Baylee. I had my own reasons. I love Baylee’s music. I wanted to see Karah and meet more friends. This was my chance to see everyone in one place just like Las Vegas. I had yet to meet Amber America. I have been friends with Amber it seems like forever. So I was off to see Baylee and meet Amber.

I didn’t want to rent a car because I heard how bad Atlanta traffic could be so Karah offered to pick me up at the airport. It was our only time we had to be by ourselves to talk. I admit, it was a crazy drive through Atlanta to get to my hotel. I was staying close to Eddie’s Attic and offered to share a room with Tracy, another BSB fan from NJ. Karah and I met her in the hotel lobby, checked-in to our room and headed back out to get some lunch. I was starving. We found a cool burger joint not too far away. BEST burger I had in a long time. After lunch we went back to the hotel to get ready for the show.

We arrived early for the show and before the doors were open. It was nice to be able to have a drink at the bar and meet everyone before heading into the main stage area. I was happy to meet so many friends I had known for over a year. Just to name a few… Misty, Vanessa, Julia, Shannon and of course Amber.

When the doors were open I couldn’t believe how small the stage was, let alone where my seat was. I looked at Karah and instantly had a panic attack and left the room.

Funny thing when I was leaving, I caught Leighanne Littrell from walking into the mens room. She wasn’t paying attention until I grabbed her arm and pulled her out of the doorway. Leighanne is the sweetest person in the world. She recognized me from Baylee’s VIP and gave me a big hug. I needed that hug and it made me relax. After a little small talk I went back to my seat and waited for the show to start.

Baylee was awesome. He sang every song off his album. I had been listening to it prior to his show and was able to sing every word to every song. Unfortunately, that meant I recorded myself singing. I won’t post any of those videos, trust me you don’t want to hear me sing.

When the show was over, I was given a copy of the set list that was taped to the stage. I had already bought a beach ball from the merchandise table which was staffed by Miguel. Another person I was happy to finally meet. He’s a great family friend of the Littrells’. He has such a nice friendly personality. Baylee was at the merchandise table signing autographs and greeting fans. Baylee asked about Chloe and it caught me off guard he remembered me and Chloe. He graciously signed set list to me and the beach ball to Chloe.

I did get emotional when Brian came on stage to sing a few songs with Baylee. First up was “Don’t Take The Girl”. I was unable to record that as I cried through the whole thing. Then Brian said a few words about how proud he and Leighanne were of Baylee. I did record Brian and Baylee singing their duet “Come Kiss Me” that is on 770-Country. It’s a beautiful song and a moment I’ll never forget.

I was overwhelmed by the crowd surrounding Brian after the show. I didn’t want to stand in line for a selfie with Brian. I had a card to give him from Chloe and a little note from myself. As time went on and the line seemed endless, I talked to Leighanne and asked her to give the card to Brian. She thanked me for coming from Michigan to the show. I told her I had a blast and it was good seeing her again.

Before I left, I was able to get a picture with Brian (thanks to Karah and Misty). I wasn’t looking at the camera so it’s not the best picture. Maybe because Karah told me to shut up so she could take the picture.

The letter may have been only addressed to Brian, but it was really meant for each Backstreet Boy. If it wasn’t for AJ, Howie, Nick, Kevin and Brian I would not be the person I am today.

It’s been an emotional roller coaster for me this year and a half. I wouldn’t change a thing though. I have met so many friends that I consider family.

I have traveled when I didn’t even know I had it in me to go places alone.

I was given this opportunity to share my story with you because of my friendship with Karah.

All this … and so much more because of the boys WE ALL LOVE.

Thank you Backstreet Boys for changing my life.

This is the final post in an ongoing series from Stephanie about how the Backstreet Boys changed her life. 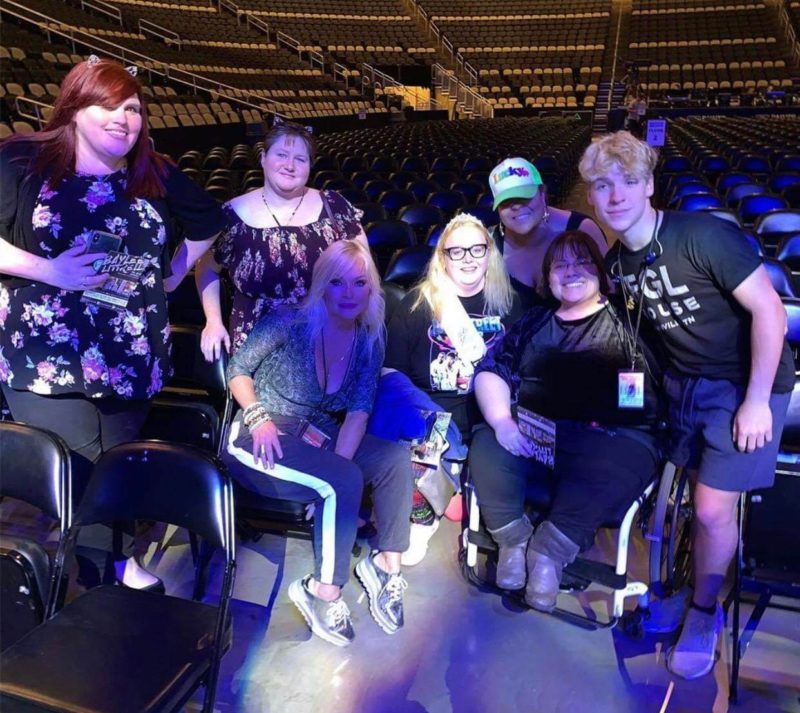 « Ask The Fangirls: Which @BackstreetBoys member is the best hugger?

Thoughts: Hey @BackstreetBoys, you should totally drop a surprise album! »