When I saw that a new book, “Larger Than Life: A History of Boy Bands from NKOTB to BTS” was going to be released, I was excited. I love love love reading books about this type of thing because, hey, boy bands are my thing – especially those from the ’80s, ’90s, and ’00s.

The book, written by Maria Sherman, was released this week and has a very cute cover and inside art that was designed by someone else. There are no real photos of the boy bands in question, which makes the art more special.

And the art is good and honestly one of the best parts of the book.

The book begins with Sherman discussing how she found One Direction and didn’t remember life before them. I can relate. I feel the same exact way sort of.

I remember life, but I don’t know how I lived before New Kids on the Block and the time between them and my love of Backstreet Boys.

That quote, possibly the best thing written in the book is so true for any boy band fangirl.

Before the author gets into the boy bands, she includes a disclaimer that includes “Definitive histories do not exist, anyhow, and for that I apologize.”

I should have taken that as a hint that there was going to be some things that weren’t very factual in the book.

First there is a quick timeline of boy bands – from barbershop quartets to the Beatles and beyond. Even in that section, there are errors. (“Making The Band,” which created O-Town, started on ABC before moving to MTV. It’s a small mistake and I’m told I’m a know-it-all, but when it comes to boy band facts, I have no shame. It won me the BSB Trivia Queen title on the 2018 Backstreet Boys cruise. That’s why the next error, “2002: Both *NSYNC and Backstreet Boys embark on indefinite hiatuses” angers me. Backstreet Boys never went on an indefinite hiatus. Nick did a solo album. The others took time off starting families or working on sobriety before regroupoing to work on what would become “Never Gone.

Chapter One begins interestingly and probably one of the highlights of the book. It takes a look back at some classical musicians in the 1800’s and how they relate to modern boy bands. That part was pretty interesting and makes me want to research it more. I never even thought about how musicians back in the day like that could have had a following like boy bands do now. Obviously the ladies didn’t act like we do back then.

One of the best parts of the book is the “Crucial Boy Band Lingo,” which discusses fans calling a band “my boys” or “the boys,” to fan fiction, fandom, fandom names, etc.

That quote is so true.

I’m not going to nitpick every single thing that I found factually wrong in the book, I’m going to highlight a few things, especially in the Backstreet Boys section. Hey, this is a BSB fan site after all!

“… In the case of ‘Millennium,’ ten tracks of near-filler …”

“Millennium” is one of the best selling albums of all time and for good reason – it’s (pardon my French) fucking perfection.

There are other things in the book that aren’t very correct, such as saying the Jonas Brothers got their start in television like The Monkees and 2Gether (They toured together long before they went on “Hannah Montana”), but the last thing I will point out is this.

I feel like this was true pre-Internet. Look at New Kids on the Block for example. There were some fans who kept following the guys the entire time while Joey was on Broadway or Donnie in movies and television, but not as many as there would have been if the Internet was around when they broke up.

But I think the Internet has made this statement untrue. For instance, look at the Backstreet Boys fandom. Twenty years after “Millennium” came out, they were selling out arenas last year across the world. Why? The Internet has given fangirls a place to still talk about the bands, stay in touch with them via social media or conventions. The Jonas Brothers and One Direction are good examples. Sure, Nick and Joe had solo ventures outside of Jonas Brothers, but when they made their comeback, “Sucker” went to Number 1 as if they never left. The fans have still been around on message boards, or blogs, or on Twitter or Facebook groups.

One Direction celebrated its 10th anniversary this week and the website crashed. Does that sound like a fanbase who has lost interest?

Overall, like I said, I was very excited about this book to begin with, but as I kept reading, I kept highlighting things. I feel as if the book should have focused on just One Direction and BTS. I feel like those were the chapters that the author knew more about. I mean, there are sections on girls they dated.  (By the way, the girl both Chris and AJ dated was Amanda Latona from the girl group Innosense – There is a small section in the Backstreet Boys section about this and wondering who the girl was.)

I’m not the type of person who thinks only people who lived through eras should write about them, but there was something special about the era of New Kids on the Block at their height and Backstreet Boys/*NSYNC in the late ’90s/early ’00s. But … yeah.

I was a boy band fangirl for New Edition and New Kids on the Block before the interwebs. We had no TRL. We sat and watched MTV and waited until one of the videos came on. We taped the song with our cassette player speaker at the television speaker so we could hear the song until the cassette (yes cassette!) came out. We called the pay-per-minute 900 NKOTB phone number just to hear Donnie Wahlberg talk to us. We begged our grandparents to buy us that Big Bopper and Tiger Beat at the grocery store because we just needed that centerfold poster. Boy band fangirls with the Internet don’t have to work that hard. They have it easy today.

If more research had been done and talking to the right people, I feel like this book could have been a lot better. No one knows the history of boy bands better than boy band fangirls themselves – especially those that have lived through it all.

If you would like to purchase “Larger Than Life: A History of Boy Bands from NKOTB to BTS,” it’s available online. You can clickhere to order it from Amazon.

Book Review: ‘Larger Than Life’ boy band history book could have been better 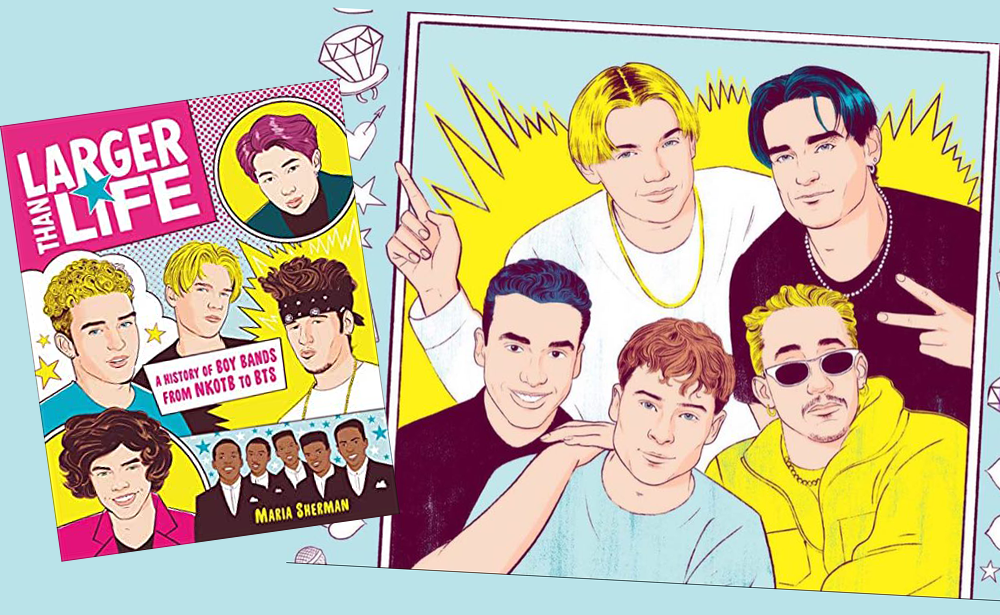 News: @KevinRichardson is in a new Hulu show and it looks amazing! »