A year ago today, the Backstreet Boys released their widely-anticipated new album, “DNA,” and let’s face it, our lives haven’t been the same since.

So we here at BSBFangirls.com decided to look back at the album and think about how our views of the album have changed over the year, especially after a tour promoting the album.

These are our thoughts:

When I first listened to “DNA,” my fave song (besides the two singles) was “The Way It Was.” Nick’s voice just cuts right through me, giving me chills and it still does that. I was lucky enough to see him do his part four times last year and I long for the day where I can see the whole song performed. A few songs had to grow on me, especially “New Love.” What do I think of it now? I absolutely freaking love it. Some songs just have to grow on you and to me, “New Love” is that kind of song.

“DNA” has probably become one of my top favorite albums of all time. I can listen to every single song without skipping one. It’s possibly the Backstreet Boys’ best work.

Has it really been a year since DNA was released? It feels like yesterday that so many of us made the trip to New York City to celebrate its release day.

I loved not knowing what to expect when I first listened to it in its entirety. Aside from “Don’t Go Breaking My Heart”, “Chances”, and “No Place” already being heard, I allowed myself to listen to each song without skipping. I am a sucker for the slow jams, such as “Just Like You Like It”, “The Way It Was”, “Chateau”, and “Nobody Else” because I literally die for their powerful harmonies and vocals during ballads. But can we talk about how so many of the songs are just straight SEX? As we are all older and into our 30’s and 40’s, it’s great to see their music get a little sexy. “New Love”, “Passionate”, “Just Like You Like It”, “The Way It Was”…..DAAAAANG ????????  I need a cold shower ????.

One year later, I still love the album in its entirety. I can listen to every song without skipping. That’s a pattern with Backstreet Boys albums; they’re complete masterpieces and DNA is no different. The only wish I have for DNA is that I could hear more of the songs performed live.

DNA was really the first new music Chloe would let me listen to in the car. We have been listening to IAWLT for a few years now. Although I love it, I was ready for new music.

I remember being in the hospital with Chloe the night that “Chances” was released. I was awake at midnight to see the official premiere on YouTube. I stayed up til 3:00 a.m. watching the video on repeat.  The minute I saw Brian sing the first line I was in love with him all over again.

DNA has great songs. I love that each one of the boys have their own song they shine on. But anytime I hear “Chances” I am reminded again that the Backstreet Boys were there for me when I needed them most.

In 2019, I initially listened to the DNA album in the track listing order.  My favorite songs were ‘Passionate’ and ‘New Love’. I had been privileged enough to be on the 2018 cruise so I had heard ‘Passionate’ there and had fallen in love with the beat. In the summer of 2018, I got lucky and Kevin sang it to my friends and I, during a showcase in Miami. ‘Passionate’ became even more special when I snagged these in Ottawa, Canada. Not only did I snag the underwear but I made a great friend in the pit that night. She caught the outer edge with her pinky and was kind enough to give them to me.

A year later, I can safely say my faves are still those two songs but I’ve also added ‘Breathe’. It’s so powerful when being performed!

Don’t shoot the messenger but my least favorite track is ‘Chateau’. I think Howie does a superb job but the song bores me to tears. I always end up skipping it. I wish they would have let him sing one of the Japanese b-sides instead! Speaking of those b-sides, my favorite is ‘Said I Love You’. You’re doing yourself a disservice if you’ve never heard these!

I was super nervous ahead of the DNA launch, because I didn’t particularly like “don’t go breaking my heart”.  So when the album came out I was super happy to say that I immediately loved “new love”, “passionate” and “ok”. Now after a whole year I really love each song on the album and think it’s one of the best complete albums they have produced. Seeing the songs live have made me love it even more!

Honestly, I still love DNA as much today as I did the first time I heard it. I never find myself “tired” of listening to it. The songs still feel new to me, even now a year later. My favorite songs are still the same – No Place, New Love and The Way It Was, while a few took time to grow on me (like Just Like You Like It). I’d have to say this is their strongest album to date, and I’m so proud it did so well! Not only is it well deserved, but also well overdue!

Kelsey and I actually listened to DNA at the same time for the first time a year ago! I remember laughing out loud at some of our reactions, ESPECIALLY to “New Love”. I think one of us said out loud, “DID HE JUST SAY SEX POLICE!?” and we laughed incredibly hard because it caught us by surprise. But, to this day, “New Love” has gotta be one of my favorites. And, thanks to Nick’s little finger diddle (that I continuously send Kelsey) while performing live, “The Way It Was” continues to be my absolute favorite. Something about hearing that song for the first time reminded me of a nod to oldies music (Elvis being my absolute favorite) and their harmonies stood out with all those nostalgic vibes. And, um, can we talk about that Kevin bridge?! Yep, #1 in my book. 😉

Wait. HOW has it already been a year?! It feels like just yesterday I was sitting on my couch, pressing “play” on the DNA album at the exact same time as Britt so that we could listen for the first time together. I think my favorite part about this album is the variety it offers. I vividly remember the funky bassline of New Love catching me off guard, then immediately being followed up by the upbeat, soulful vibes of Passionate (prob my favorite track then AND now) — I was just in awe. Tracks like those two on top of the acapella Breathe, emotional The Way It Was, and chart-topping DGBMH, I mean, I couldn’t have felt more proud to be a modern BSB fangirl — and I still feel the same way today. 🙂

When the DNA album was released it was such an exciting and happy time for me! First of all, I won / passes to Good Morning America in NYC and also got to attend the official album signing at Sony Square the next day. So every time I think of DNA, I think of that weekend a year ago that started my incredible year of BSB in 2019. When the album was released, my favorite track was “New Love.” I just loved its upbeat and contemporary pop vibe. I also immediately loved “The Way It Was,” because well duh, Nick’s vocals. Now every time I hear it all I can think about is him singing it solo and front and center during the DNA Tour. A song that’s grown on my since the album dropped? “Nobody Else.” I don’t know what took so long, but now I turn it all the way up in my car. DNA will always hold a special place in my heart since it’ll remind me of the incredible 2019.

One Year Later: @BackstreetBoys’ “DNA” – What we think now 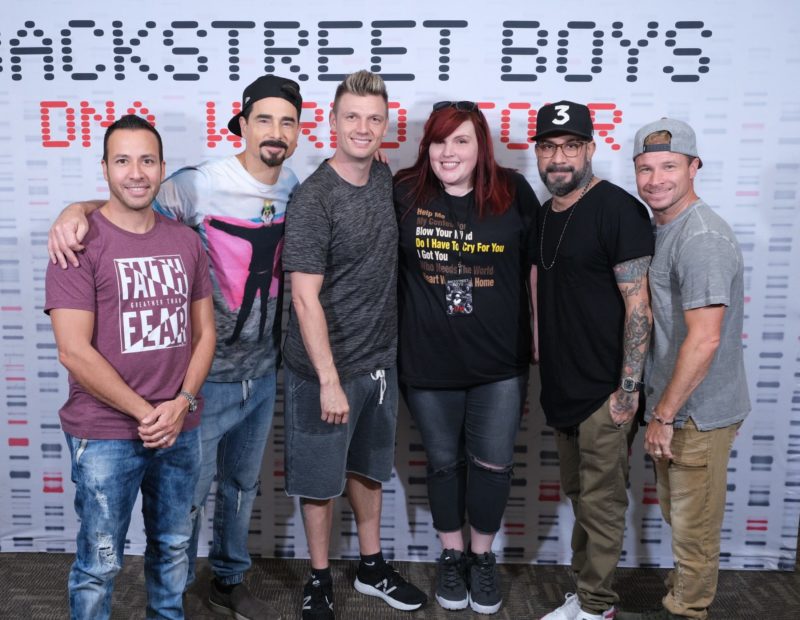 Comments Off on One Year Later: @BackstreetBoys’ “DNA” – What we think now

« Ask The Fangirl: What is your weirdest interaction with the @BackstreetBoys member?